A practical definition of forests

Understandings of ‘forests’ or ‘natural ecosystems’ is a prerequisite and can vary greatly among stakeholder groups. Different definitions may even coexist in the legal framework of a producing country, with common confusion between legal classifications (areas officially zoned as forests), types of forests (e.g. planted or natural forests), and biophysical definitions (e.g. mature tree height and canopy cover). For example, in Indonesia 33.4 million hectares of ‘legal forests’ are non-forested, and 7.2 million hectares in non-forest areas are covered by forests, according to legal and biophysical classifications.

An appropriate definition of forests and deforestation, or conversion of natural ecosystems, would be one that:

Capturing forest degradation can also be an important issue in particular supply chains, for instance in the cocoa sector in West Africa, although this remains a harder challenge to define and monitor.

The concept of ‘commodity deforestation’ refers to the deforestation (or conversion of natural ecosystems) that is attributable to the production of a commodity. It corresponds to the areas cleared for crop cultivation or livestock farming.

A methodological choice: how to attribute past deforestation to subsequent land uses

The attribution of deforestation to single commodities can be complex, especially in contexts where deforestation is driven by an interplay of multiple land uses. The time lag between the deforestation event and the commodity production is also intrinsic to perennial crops that take years to mature into their harvesting cycle.

The simplest approach remains the one widely used in certification schemes: the choice of a ‘cut-off’ date. This is the date from which the conversion of a parcel of land from forests or natural ecosystems to agriculture is no longer accepted. With this approach, there is no need to distinguish between direct or indirect conversion, rather forests or natural ecosystems that were present at the cut-off date considered when measuring deforestation.

Similarly to the definition of forests, the ‘right’ cut-off date is:

This may be framed by normative references specific to the sector or the trading bloc involved and informed by socio-economic impact assessments of alternative cut-off date options.

The Accountability Framework Initiative (AFI) recommends respecting the dates previously recorded by the most committed actors, when they exist. This 2020 date is also in line with the commitment made by a large coalition of corporate groups and governments (Consumer Goods Forum commitment in 2010; New York Declaration on Forests 2014; Amsterdam Declarations 2015). Different cut-off dates may exist for different commodities and contexts. For instance, 2008 is the cut-off date for the moratorium on soybean expansion in the Brazilian Amazon and November 2005 for the Roundtable on Sustainable Palm Oil.

One against which deforestation can effectively be measured

The choice of the cut-off date should match a year for which forest data is available.

It is recommended that the highest level of detail possible be retained from the data. If data is available at municipal level for instance, there will be value in producing estimates for municipalities without necessarily aggregating these at district or provincial levels. The higher the level of detail (granularity), the easier it will be to detect where the greatest sustainability risks are concentrated, in turn, lowering the costs of subsequent risk management strategies. 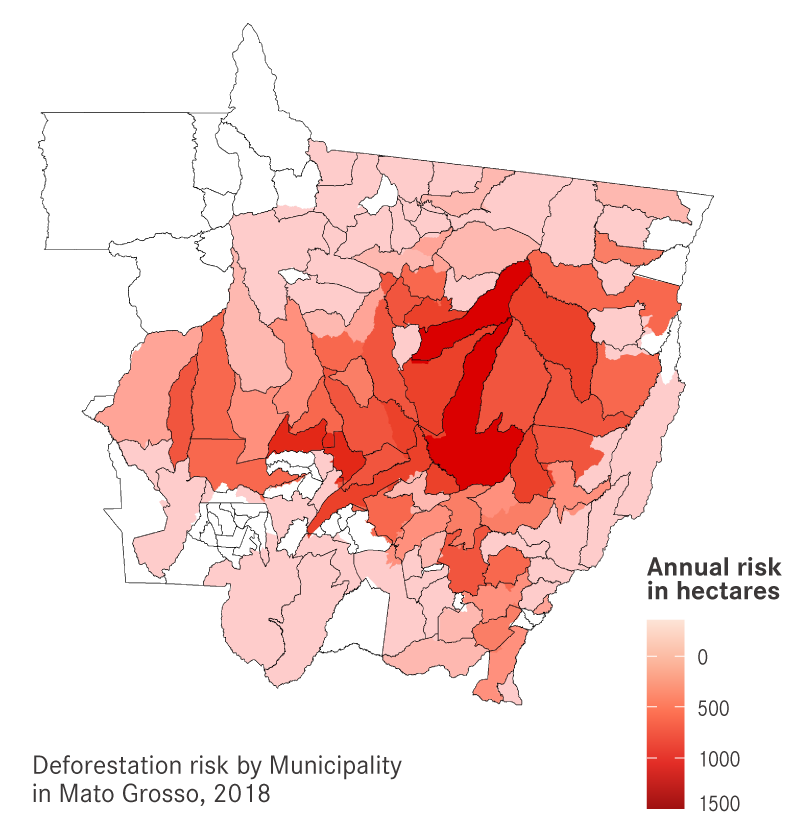